I love teaching yoga to kids in detention. I have found that many of the young people I encounter in juvenile detention can’t remember when they last heard a good word from anyone in authority, whether it be parents, teachers, judges, probation officers, or detention staff. They are so open and so ready for what we bring them.

A juvenile or adult prison yoga class that includes a non-judgmental, positive message is oftentimes revelatory and transformational. Participants are exposed to tools through the physical and mindfulness practice they can use to calm themselves and achieve focus, personal strength and balance in their lives. These resources remain available to show us the way from mindless reaction to thoughtful response in difficult circumstances. 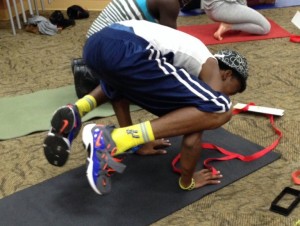 If we have clarity as to the nature of the facilities, the people who run them, the restrictions on the inmates, and the staff and ourselves as teachers, we have the best chance of creating successful and sustainable yoga and mindfulness programs in prison settings.

How to Get Into the Prison to Offer Yoga

It is hard to get a yoga class going in detention centers and prisons in most places in the United States. To do so requires an understanding of the bureaucracy and culture in which classes will take place.

Yoga teachers often encounter a general disinterest and suspicion on the part of government administrators about bringing yoga into detention centers and prisons. Sometimes this is rooted in lack of knowledge, lack of interest, bureaucratic inertia or outright suspicion that yoga is a subversive or an anti-Christian activity. Most often, succeeding in bringing yoga classes into a detention center or prison must be facilitated by an administrator on the inside who takes up the cause and works hard to maneuver through the bureaucracy to make the class happen. Even with such a person advocating for the class, unless s/he is a top decision maker, someone in the hierarchy above our ally can prevent the class from happening, just because they say so.

Some of the things we can do to facilitate the process of class approval include supplying decision makers with information and studies showing the benefits of yoga and mindfulness to the population they are serving, providing references from other facilities where classes have been successful, inviting decision makers to come to a class at another facility, and offering to do a 6 – 10 week pilot program. Experience has shown that once exposed to yoga classes, the vast majority of prison administrators become believers in what yoga and mindfulness can do for the inmates, the staff and the community.

Stay Mindful of the Culture Behind the Walls

Once a class is approved, the peculiarly entrenched, authoritarian structure of prison administration is a constant presence hovering above and around our classes. Teachers must always be mindful of this, and respectful,. If we want our class to survive, we have to play by the institution’s rules. 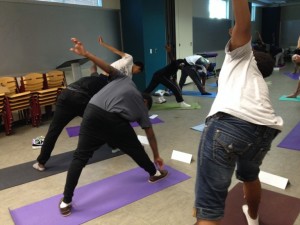 Prison rules are very stringent, not just for the inmates, but also for guards, staff, and volunteers, including yoga teachers. The harshness with which inmates are treated seeps into the system as a whole. It can show itself between staff members and against us with no warning.

An inmate may be verbally or physically assaulted by staff if s/he breaks a rule (and sometimes even if no rule is broken). Further, staff and administration rotates often in prisons. A new warden can mean new rules. Staff can be transferred, exiled or dismissed if they break a rule or cross an administrator above them. Maintaining order in the prison is the highest priority for the administrators. We can be certain that anything that threatens that order will be dealt with swiftly and forcefully.

Nonetheless, while in detention centers and prisons I always maintain a positive and upbeat attitude and treat the staff with kindness and respect. Bear in mind that the staff oftentimes feels as oppressed as the inmates. A kind word goes a long way.

Adhere to All Rules

There are many hurdles to teaching in prison. Background checks, and other orientation and testing, are usually required before a teacher is allowed to enter a detention center or prison to teach yoga or mindfulness. In Georgia, teaching in a juvenile detention facility requires a background check, fingerprinting, and passing tests on the federal Prison Rape Elimination Act (PREA) protocols that are in place to prevent sexual contact between volunteers, staff and inmates. There are strict rules against touching inmates and clear protocols for reporting any questionable conduct, complaint or violation of the rules. The administrators are deadly serious about the teacher’s knowledge of the rules and adherence to them.

It is critical to adhere to all rules, even if it appears that some are not being followed by staff. This cannot be emphasized enough. We never know when conduct may be reported by a staff member, or observed by an administrator. Administrators may suddenly change and, where we thought certain actions were permitted (even though technically against the rules), the new administrator may act swiftly to end the program. We may not be aware of a rule change that effects our class, or of the arrival of a new administrator who simply wants to end the yoga program. We can assure the greatest likelihood of success, however, by strictly adhering to the rules. 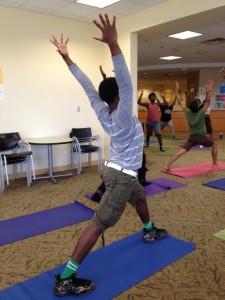 The participants are either aware of these rules, or understand our conduct if we explain it within the context of the facility rules. The bottom line is that the classes are not about fraternizing. They are first about the message; the non-judgmental atmosphere we create once or twice a week and the safety the students feel when they are in the class. I have not yet encountered a group of inmates and staff that did not want their class to continue once they were exposed to yoga and mindfulness.

Whether correct or not, whether liked or not, the rules are also there to protect us. Most of the time we do not know why someone taking the classes is incarcerated, or what their history of violence might be. I heard a teacher in a workshop tell a group of aspiring prison yoga teachers that he believed that he could walk freely and unaccompanied in the prison yard, because he believed that the prisoners “had his back.” This is a very dangerous assumption for any civilian working inside a prison. In a heartbeat everything can change, and if left alone with any inmate, a volunteer can be attacked in the blink of an eye.

Even if a detention center or prison does not require a staff member to accompany us at all times, I suggest that as a matter of our own personal and organizational policies that we never allow ourselves or another teacher to be alone with an inmate in a prison setting.

The Challenges Can Be Overcome to Everyone’s Benefit

Teaching in a detention or prison setting will always be challenging. There are the guards who want to make noise and kick inmates while they are practicing, the oblivious staff who allow those heavy prison doors to slam during Savasana, and the days when the mats are locked in the closet and no one has the key.

We teach through these distractions and make the best of it. The participants love us for it. My experience and the experience of those I know is that bringing yoga and mindfulness into the prison is seen as a wonderful gift by the participants, the staff and the facility.

One day at the beginning of a class, a young woman participant raised her hand. When recognized she said, “I just want y’all to know that I have been calm for the last week, and I have never been calm before in my life.”

To a large degree, success is simply the ability to bring yoga and mindfulness to those who are in detention facilities and prisons. When we understand how those facilities truly operate, we have the greatest likelihood of getting to lead a class, and making our program successful and long lasting.

Bob Altman is a 200-RYT who co-founded Centering Youth, an Atlanta-based yoga service initiative that brings yoga and mindfulness to young people in the criminal justice system, those who have been sexually exploited, the homeless and other young people and adults. He serves on the Board of Directors of the Yoga Service Council, and is committed to working with the yoga service community to create sustainable yoga service organizations, and raise awareness of and involvement in yoga service across the nation, and beyond.