Yoga & Diversity, Pt. 2: From Yoga in Jail to Yoga in the Community ~ Karla Velasco

This post is the second in a 3-part series exploring diversity (or the lack thereof) in Chicago’s yoga community. The author, Karla Velasco, wrote it as part of Natalie Tomlin’s “Explore Chicago” course at DePaul University in Winter 2016. This class took students to visit several Chicago yoga studios, and asked them to write about their experience. Karla chose to frame her reflections as letters to her Abuelita, or Grandmother. 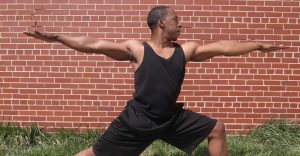 No going out today. Instead, we are going to have a guest speaker: Marshawn Devon Feltus, from the West Side of Chicago.

Marshawn isn’t like the average yoga teacher. He actually was incarcerated.

A tough guy who was convicted of a first degree murder practices yoga.

But I don’t judge him. All of my life I’ve seen and experienced violence. In middle school, I constantly saw bloody fights when I walked to class. I saw the kids smoking marijuana and smoking cigarettes in the bathrooms and in the streets. I saw rival gangs confront each other. Beat each other. Shoot each other. I saw my friends in jail cells and funeral beds too soon.

I grew up in fear.

And maybe Marshawn did too.

So, I’m not going to judge him abuelita.

I’m going to hear his story… 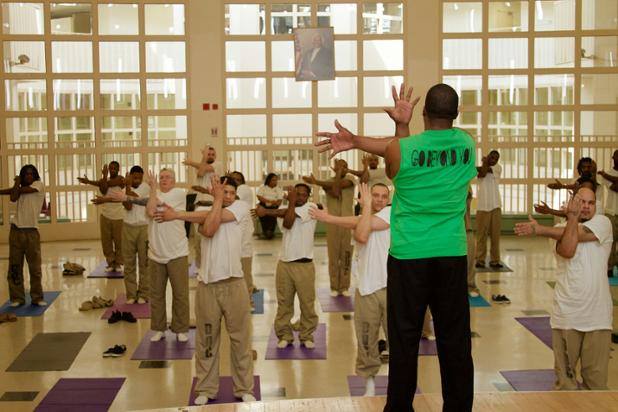 When Marshawn walked in the class, he had on ordinary clothes. No yoga clothes. No fancy clothes. Just ordinary, like you and me abuelita.

You would think he would seem intimidating because he spent 18 years in jail. But he wasn’t.

So, what made him change his life?

And that was a sufficient answer for me. He didn’t need to explain what he meant. I knew that feeling.

He said that after years of “testosterone weight lifting,” it took a toll on his joints.

In prison, people could not practice self-defense exercises such as Taekwondo.

When he saw someone do it, he thought he had clout in the prison.

But Marshawn was wrong because the man, nicknamed “Buddha,” was practicing yoga, not a self-defense exercise.

He wasn’t completely wrong though, because he did have clout that would shape Marshawn for the rest of his life . . .

When Buddha started teaching a yoga class in jail, Marshawn decided to go to in order to help him with his injured body.  The first class brought him,  “so much relief and comfort to my body. It was orgasmic.”

A couple of months later, Buddha was offered a top-tier assignment in prison to work in the industry, and he accepted. He told Marshawn that he had to take over the class. And that’s where his teaching began, abuelita.

After serving his time, Sharon Steffenson, the editor and publisher of Yoga Chicago magazine, interviewed Marshawn. He told her that he began teaching yoga class at a local church and at community events.

But I remember Marshawn saying that when he went to church before he was incarcerated, he didn’t really take it all in because he was disconnected with his faith.

So why teach in the churches?

Does this mean that yoga helped Marshawn get in touch with religion?

“You cannot tell me that god doesn’t exist,” he said.

You see abuelita, you are both on the same side: a mutual belief in god.

In Tommy Rosen’s essay entitled “Yoga and the 12 Steps: Holistic Recovery from Addiction”, which appears in the book 21st Century Yoga: Culture, Politics, and Practice, he stated that yoga is supposed to connect us to “something greater than ourselves.”

But what is exactly is “something greater than ourselves”?

Tommy Rosen also said, “I’ve never seen a person in acute addiction recover without two things: A spiritual path and a community to support it every single day.”

That’s what happened with Marshawn. He changed the way he was by having a spiritual path and being a part of the yoga community. 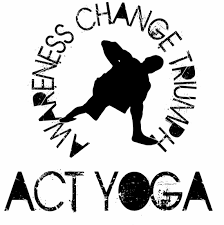 But spirituality is not a religion, it’s “a mental state of mind.” That’s why Marshawn focuses on the template of yoga, not the theory. He wants to implement the psychology of yoga to “let the guys find the true value of yoga.” This mental state of mind is different than religion. He is more connected to his faith because that was a personal decision that he made. He does not enforce religion in his yoga practice. His religion is personal. It is now a part of himself, not his yoga practice.

Sharon Steffensen also asked Marshawn why he had not tried yoga before, and he told her he was hesitant to try yoga because he considered it “white people exercises.”

Sounds familiar, right, abuelita? I remember thinking that not too long ago.

So, how does Marshawn deviate from “white people exercises”?

How does Marshawn create diversity in yoga within his studios?

In Chicago’s West side, Marshawn has two ACT Yoga studios. Both of them are in the Austin neighborhood.

According to Statistical Atlas, 86.1% of the population in the neighborhood of Austin is African-American. I live just north of Austin. I can’t picture the African American or the Latino community in Austin hyped up about yoga in the West Side for the exact same reason Marshawn said: it’s “white people exercises.”

Our communities face a problem: “Our people’s ignorance is what keeps them from a lot of things.”

In order to attain diversity in terms of who practices yoga, education is fundamental. Our communities were never educated on what is yoga and what potential  benefits it can bring. We just tend to assume that it’s not for us, so we call it “white.”

Otra vez, how do you attract diversity to your studio when this preconceived notion of yoga is prevalent in the African American and Latino neighborhoods in Chicago?

“My style is different,” Marshawn said.

Many community members have told Marshawn that his class made them feel like they were talking to a friend rather than the typical skinny Caucasian yoga teacher with a soft voice that tells you . . .

Marshawn’s down-to-earth personality attracts diversity, especially from the African American community who is not exposed to yoga.

Along with his personality, so does his teaching style.

Every teacher has to have a dress code, right abuelita?

Not Marshawn: “Whatever I put on in the morning, that’s pretty much what I will teach in.”

When he said this, I thought about Gabriel Halpern and his Beatles pajamas. For them, there is no yoga attire. Only you as an individual know what you are comfortable wearing, not your yoga teacher.

When he teaches, there is a difference between teaching males, women, and co-ed.

“How to focus on what does he need even while she’s in the class and she’s in the class.” He is administering a service and a help collectively to each individual in his yoga class. He is so diverse in his practice that he offers 7 different types of meditation. Not a lot of yoga teachers do that. But Marshawn is willing to do that to serve his African American community well, and fulfill their needs.

While Marshawn is bringing yoga to the African American community . . .

What’s going on with the Spanish-speaking Latino community? Who’s serving them, abuelita?

This is in the same neighborhood as Yoga Circle: River North. According to City Data, more than 75% of the population in the neighborhood identify themselves as “White.”

Si, it is a “White” neighborhood.

Vishwa Nirmala Dharma is a group of people who have been impacted by Sahaja Meditation and now offer free programs and classes to Chicago communities, companies, social organizations, and schools. On the South Side of Chicago, classes are conducted in English and Spanish for free. The purpose of this class is to teach students how to progress with their meditation at home, maintain inner peace, satisfaction and happiness through Sahaja Yoga Meditation techniques. This class is taught at Back of the Yards, which according to City Data, is more than a 60% Latino neighborhood.

Even though both of these studios have opposing ethnic communities, they both make me happy.

I’m happy that both of them are taking into consideration the fast-growing Spanish-speaking community.

I’m happy that yoga is extending its diversity through language.

I’m happy my Latino brothers and sisters can experience yoga.

Who knows, if I keep digging all of this yoga, maybe I’ll open my own Latino yoga studio one day.

Karla Velasco is a Chicana student and activist born and raised in Chicago, but very in touch with her Mexican indigenous roots and Latino culture. She recently completed her Freshman year at DePaul University, where she is double-majoring in Latin American/Latino Studies and Political Science. Karla serves as a community organizer in the Pilsen neighborhood of Chicago, a culturally rich community that’s home to the largest Latino population in the city, and as Chair of the Student Leadership Youth Committee at Pilsen Alliance. She is also a certified Domestic Violence Advocate at Mujeres Latinas en Accion. Karla loves to explore diversity, and has become increasingly interested in exploring these issues within the context of yoga.