I want to see a new convergence of yoga, mindfulness, and social justice. Can this happen? I don’t know. I have a gut-level, insistent feeling that it’s possible. But I also feel that if this possibility is ever going be realized, the time to take action is now.

Why do I feel such a sense of possibility – and urgency – when it comes to this vision of integrating yoga, mindfulness, and social justice? That seems like it should be an easy question to answer. But every time I try to pin down my response by wrestling it into words, I find myself going around in circles before eventually hitting the dead end of my own internal contradictions. 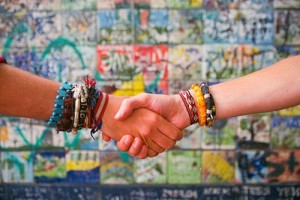 This happens for multiple reasons. There’s my personal bio as someone who’s old enough to have been inspired by the progressive political culture of the ‘60s, but young enough to identify much less with its flowering than its demise. When I hear the term “social justice,” I have a visceral sense of what it means, and where I’d want any movement dedicated to it to go. When I start to parse that out and match it against current political realities, however, my bubble of visionary hope suddenly feels very small, and fragile. It’s hard to keep it from bursting.

Then there’s my social scientist side that sees a confluence of promising trends. I try to lay it out very logically:

Unprecedented Popularity of Yoga and Mindfulness +

. . . and attempt to make a rational case for why everything’s in place to make a new convergence of yoga, mindfulness, and social justice happen – now.

Pretty quickly, however, my lawyerly brief starts to sound unconvincing, even (perhaps especially) to myself. I see what was supposed to be logical prediction has blurred muddily into wishful thinking. 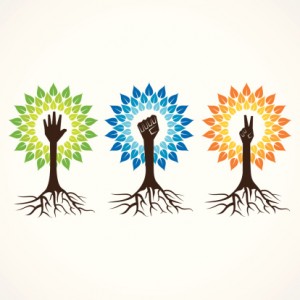 Then, I read the paper and absorb the latest bout of tragedy and horror. I feel sick. I find it hard to get through the reports of 24-year old Freddie Gray (not that much older than my oldest son) being randomly snatched off the street and thrown into a police van, shackled hand and foot, soon to die from a snapped spine. I remember the shock I felt the one time (many years ago now) when I walked around his neighborhood of Sandtown-Winchester in Baltimore (where I was interviewing people for a research project). I remember what I know about the realities of mass incarceration and related issues in the U.S. and think – How can yoga and mindfulness possibly make any difference? And feel like a fool for imagining it.

Next comes my disillusioned, sick-and-tired-of-it-all side that never wants to think about social justice issues – or the complexities of contemporary yoga and mindfulness culture – again. I fantasize about retiring from the world and narrowing my scope of vision to nothing more (or less) than the proverbial tending of my own garden. I reflect that maybe those ancient yogis who lived in caves and practiced to disengage from the world, rather than wrestle fruitlessly with it, were really right after all.

But then, I remember that even if what they practiced was right for them in their time and place, that doesn’t necessarily mean that it’s right for me, here and now. And I realize that even if I could move from the South Side of Chicago to a bucolic country cottage and do nothing more than garden and practice yoga (which I can’t), that wouldn’t necessarily give my life meaning.

It’s not that I believe that spiritual paths that prioritize worldly disengagement are inherently wrong. I don’t. But there are many different types of spiritual practice. Inescapably, the one that calls me involves engagement with the world, not retreat from it.

Realizing that, I then return to that visceral, insistent feeling, and think that it’s not just me. That there’s something happening in our times that calls for a new spirituality of social engagement. And that while yoga and mindfulness aren’t going to be the whole of it by any means, they may have a potentially important role to play.

Having gone around in such circles multiple times now, I’ve come to the conclusion that the underlying problem is that if my vague vision of integrating yoga, mindfulness, and social justice is ever going to materialize in a way that’s meaningful to me, then each of those key components – as well as their relationship to one another – will have to change.

It’s not, in other words, simply about integrating yoga, mindfulness, and social justice as three fully formed, pre-established things. Rather, it’s about a process of bringing those streams of thought and practice together in ways that synergize something new.

In his just-published book, Mindful America, Jeff Wilson recounts how Google exec’s Chade-Meng Tan’s 2012 bestseller, Search Inside Yourself, successfully spread the new Silicon Valley gospel that mindfulness could – all by itself! – achieve world peace:

“As it turned out, the path to world peace lay not with large-scale economic change, social revolution, political solutions, or breakthrough scientific advancement. Instead, world peace required nothing more (or less) than creating a mindful world, one meditator at a time.”

Let’s get real here. It’s easy to sit in your office suite in Silicon Valley and fantasize that meditation alone will magically solve our collective crises of economic inequality, social injustice, and environmental devastation. But try doing that in the middle of Sandtown-Winchester. Try doing that in your prison cell after you’ve been locked up for years on a nonviolent drug offense (which is why almost half of the 2.2 million people – 60% of whom are African American or Latino men – incarcerated in American prisons are there).

Of course, the yoga community has long been infused with this sort of wishful thinking as well. It first dawned out me that one of my beloved yoga teachers was woefully self-deluded when she tried to convince me that she was taking action to stop the BP oil spill by sitting on her mat in Chicago and “sending her breath” into it – the claim being that her healing powers would magically penetrate into the Gulf of Mexico and patch the leak. Um . . . say what? Needless to say, that didn’t prove effective. But, that pesky fact didn’t seem to change her basic point of view, either.

So be it. I don’t see any point in berating those who are drawn to escapist fantasies – god knows, I understand why they want them. But . . . c’mon. 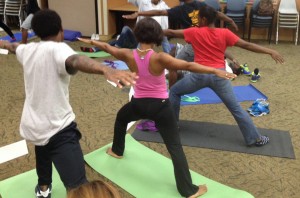 While it may sound overly “judgmental” to some, I believe that to tell ourselves we’re committed to a better world – but then avoid seeing its very concrete problems if we’re privileged enough to have the opportunity to do so – is to engage in a form of Avidya, or delusional “not seeing.” Because there’s a huge contradiction there. It’s one thing to realize that you’ve given up on the world, and are pursing a path of spiritual withdrawal from it. But to say that you’re helping the world by working with yoga and mindfulness to disconnect your mind and heart from what’s happening in it makes absolutely no sense whatsoever.

But then – if we do see what’s happening and want to take action – what the hell do we do? In the U.S., probably the one thing that most of the population agrees on is that our political system is corrupt and dysfunctional. Most of our existing paradigms of political thought are superficial and divisive. And the hard truth is that seeing problems is not at all the same thing as finding answers. And, that even when we have good answers to provide, implementing them is another issue entirely – and a very, very steep mountain to climb.

“Start where you are.”

How many times have we heard this in reference to our own yoga, meditation, or other personal practice? If you’re reading this, my guess is probably, a lot. We’ve been accustomed, however, to thinking of this work of “starting” in purely individualistic terms.

What if we shifted the framework to focus on how we start to integrate our own yoga and mindfulness practices with the collective work of social justice? That way, we might be better able to access the energy, discipline, and faith to move forward without needing to feel that we have the right answers, along with the means to implement them, in advance. If that single cultural shift could happen on a big enough scale, I believe that a lot of valuable work, which would have a hugely positive impact on many lives, would definitely come out of it. 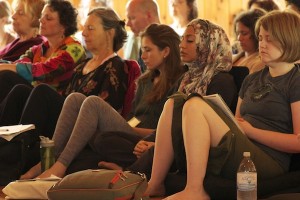 Happily, if you’re interested in such a project, there are places to go, and like-minded people to see. One particularly important opportunity if coming up next week (May 14-17), when the Yoga Service Council will be hosting its 4th annual Yoga Service Conference at the Omega Institute in upstate New York. It’s not too late to register: Check out the schedule here, and come if you can.

I’m honored to report that I’ll be moderating a panel discussion at this year’s conference on yoga, mindfulness, and social justice focusing on relevant work that’s being done to address the problems of the so-called “school-to-prison pipeline.” Our four panelists – Leslie Booker, Marshawn Feltus, Argos Gonzalez, and Judge Chandlee Kuhn – are out there doing the work, boots on the ground:

And that’s just one panel. The full conference offers much, much more.

To be sure, I don’t have the answers I’d like regarding how to break up the school-to-prison pipeline. Neither do the other panelists – as amazing, accomplished, and dedicated as they are. But that’s not the point.

The work of integrating yoga, mindfulness, and social justice is already in motion. It has the potential to take root, grow, and blossom in ways that we can’t yet imagine. But the only way this will happen is by taking action. That doesn’t mean that everyone should rush off and start teaching yoga prison. There is no one-size-fits-all. It does mean, however, making a commitment to opening yourself up to both the pain and beauty of the world, and listening.

If you hear your heart telling you that it’s time to connect with others to try and increase social justice, engage your mind and figure out: What’s the next step? For me, right here and now? What can I do, realistically? And take a deep breath, and another, and step forward – and then, when it’s time, take another step, and then another, again.

If we can reimagine “being the change you want to be in the world” as a collective project for social justice, rather than an individualistic pursuit of happiness, then we may be well on our way to changing the world. Even if we’re not, we’ll spark a lot of hope and beauty, and make our own lives, as well as those of countless others, richer and more meaningful in the process.

Reframed in this way, the integration of yoga, mindfulness, and social justice can’t lose, regardless of the outcome. It’s worth a try. And the time is now.

*Carol Horton, Ph.D. is a writer, educator, and activist working at the intersection of mindful yoga, social science, and social justice. She is the author of “Yoga Ph.D.: Integrating the Life of the Mind and the Wisdom of the Body,” and co-editor of “21st Century Yoga: Culture, Politics, and Practice.” A popular writer and speaker, Carol serves as a teacher with Yoga for Recovery, an adviser to the Yoga and Body Image Coalition, and is a member of the Board of Directors of the Yoga Service Council.